skip to main | skip to sidebar

This was not how I meant to start blogging again, but this was the best way I could think of to share what happened to baby Crew and to thank everyone for all the prayers and support that my family was given. So here is what happened... anyone who has had the chance to be around Crew would agree that he was not a happy baby. He cried, a lot! This was something Jacob and I have been used to because my three other children were babies that cried all the time too. So when my fourth baby turned out to be colic, not a big surprise. But the crying never stopped, at times seemed worse. The thing was that he would stop crying when he was held, so thats were Crew lived, on my hip! From time to time he would play and smile, but not very often. On top of this Crew seemed to be sick a lot. He threw up a lot, usually he had fevers when this happened, he seemed to be going to the doctors every 2, maybe 3, weeks. He was not crawling and his legs were always locked stiff straight at the knee, toes pointed. This became a concern and so we then saw a neurologist. Crew was diagnosed as being developmentally delayed. He had a MRI appointment for this coming Tuesday just to rule out the 1% of any thing being wrong, as the neurologist put it. That pretty much sums up everything until last Sunday. Crew started throwing up again, actually in the middle of church all over Jacob(hahaha, that part is just a little funny), but then stopped by the afternoon. He ate and slept normal that night, so we started to think maybe he is just having a hard time tolerating milk. I thought this because he seemed to just randomly throw up and it was ever since he switched over to whole milk. By Monday night he was throwing up again, not keeping anything down, but still no fever. Tuesday morning I call to get him into the doctor, again, and got a appointment with another doctor in the office because I wanted the soonest I could get. I knew something was wrong, he just wasn't right, so I even called the nurse hot line right after making his appointment to see if I should take him into the ER now. He looked really dehydrated, and already going through that experience with Shelby once before I knew the signs and I knew once hydrated you have a much happier kid. The nurse thought I would be fine waiting till 9:00, so thats when I took him to the doctor. Crew kept 1 ounce of Pedilite down for a half hour in the office so he felt I was okay to go home. I was told to not let him sleep longer than 1 hour and to keep pushing fluids down him. By now Crew was even more sleepy and it was harder to get him to respond, but the doctor felt he would be fine but to go to the ER if he threw up again after drinking more. I went home, uneasy, and I couldn't get anything down him, he threw up a small amount and thats when I knew he needed more than liquids. I thought lets just get him hydrated and he will feel much better. I got my other three kids off in different directions, called Jacob and let him know that I was taking Crew to the ER and off we went. After waiting 2 hours, it was our turn to be seen. The ER doctor came in and questioned why he was having a MRI the following week. He let me know he worked "worse case scenario" down and wanted to do a CT scan because he thought it was weird that he was throwing up and had no fever. So after the CT scan the news I got was shocking to me. The doctor came in and said, "I know why your son is throwing up, he has a unbelievable amount of fluid that is putting to much pressure on his brain. I called a great pediatric neuro surgeon, they are getting everything prepared for you, a ambulance is coming to pick you up, your baby has to have surgery tonight." I was shocked and scared, although those words don't even begin to explain my feelings. I called Jacob and told him to get here now, the crazy thing was Jacob had a bad feeling about Crew and had planed to leave work early so had already made plans for his work, and then he was off fighting traffic to get to us. The ambulance ride was what it was, they had to keep waking Crew up every 10 to 15 minutes to make sure they could get a response from him, we made it to the hospital in LA in no time at all, odd we hit no traffic on a Tuesday evening, maybe it was like 6 o'clock...Crew was off to surgery right away, they had to put a drain in his head to relieve the pressure before there was anytime to do a MRI and see what the problem was. This is Jacob saying by to Crew right before his first surgery. 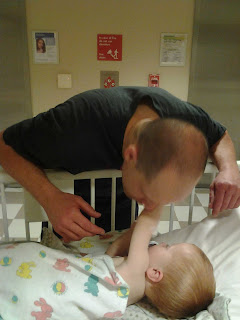 After his MRI everything looked good, they kept his breathing tubes in but had to wake him up between surgeries to make sure he would have no complications. 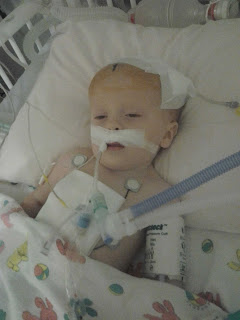 The second surgery was to place a shunt that will drain his fluid to his stomach to be absorbed there. This will stay in him and as long as it functions properly he should have no real problems from it. 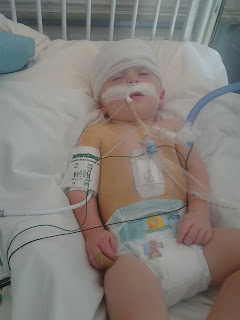 He was not happy, it was really sad to be so helpless in trying to comfort your baby. He got to the point of being mad and learned that he got a reaction from the nurses if he bit down on the tubes inside his mouth. He had the breathing tubes in him for about 6 hours after surgery. 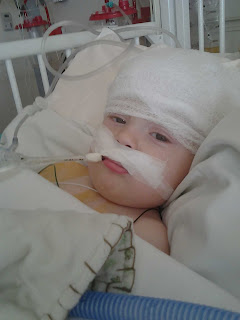 Finally I got to hold my baby. 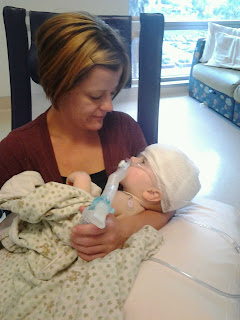 The crazy thing was to watch how BIG of a change he had only hours after tubes were out and all the meds were out of his system. He was saying all three words he knows (mama, dada, and uh oh), he was laughing, and smiling. This was not the baby we had before, he is a whole new, happy, baby now. 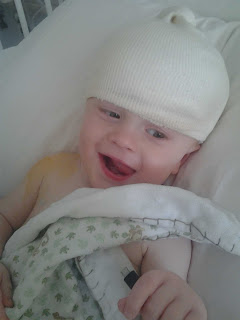 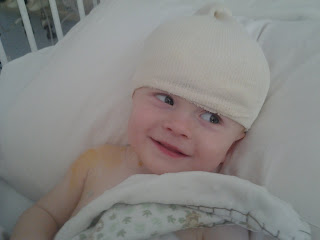 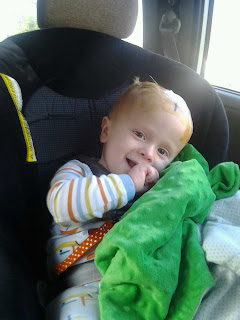 This blog doesn't even begin to describe the panic, fear, and helplessness Jacob and I both felt. We did come close to loosing our baby, and that part still scares me to death! But the thing I wanted to share with everyone was during all these emotions, when I would focus on saying a prayer for my baby, I did have a calm feeling come over me, although it was brief, when ever I would calm myself down enough I would feel it. My sister kept everyone posted on Facebook and asked for prayers. Jacob and I both sent out text to friends and family asking (begging) for everyone, anyone who had faith to pray that our baby would get through this. I know that Heavenly Father heard all the prayers that were just for Crew. I also know that Crew was not the only person being prayed for at that time, the world is big and He hears and answers everyones prayers, but there was a moment when I felt so close to God, I felt that Crew was the only one on His mind, and I know that He was very aware of my baby. So thank you. Thank you to everyone who had enough faith to pray for Crew. Thank you for keeping him in your thoughts and hearts. I do have a testimony that prayer is one of the most powerful gifts Heavenly Father has given all His children. And the more prayers being made the more powerful they can be. Jacob and I both got comfort during this time from everyones support and kindness. Thank you for loving Crew and my family enough to pray for us. 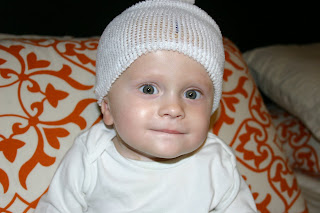 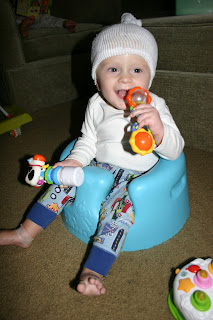 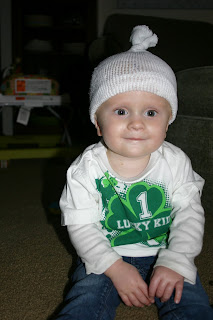 As of now Crew is doing great. Jacob and I are a bit on edge making sure there are no signs of pressure being built back up, but Crew is one happy, funny baby (who knew?) I will keep everyone posted on his recovery...
Posted by Jillonnie at 11:21 AM

Crew is adorable! I hope he is still doing well! Thanks or sharing your story.

Jillonie-
This is your cousin! I had no idea about Crew. I am so so sorry. Glad he was able to get the help he needed in time.

We recently had a scare of our own with our baby girl, so we know how scary and helpless it feels.

Love you! I will be in souhern CA in a few days! Hope to meet your husband and all your kids while I am there!

Man oh man! No one is spared from trials! So glad to have a happy ending. Thanks for sharing vey uplifting. Hope all continues to go well for your beautiful family.

Visit to this site leaves a highly satisfying note in minds along with its impressing collection. Let the floral charm spread everywhere with www.rightflorist.in/Mumbai/Mumbai_florist.asp